Over a few years, the tenant of this Morayfield home in northern Brisbane had noticed more and more structural issues appearing throughout the building.

Horizontal wall cracks in the brickwork, both inside and outside the building, appeared first. Not long after, cornices inside the house began to separate. Then the floors started sloping, making the tenants feel as if they were walking up and down hills.

Concerned, the tenant raised these issues with their real estate agent. After considering a wide variety of building and engineering options, the agent contacted Buildfix for expert help.

Upon arrival, we learnt that the house was only 15 years old. For a house so new, structural problems of such a nature are extremely serious. We immediately determined the house was sinking at an alarmingly dangerous rate, causing cracks to appear inside and outside.

As we investigated, we discovered the house had two major problems.

Firstly, the house had been built on a waffle slab that wasn’t distributing its load evenly. Instead, the load was being distributed over small strips, only about 100mm in width each. Very little of the waffle slab was resting on truly solid ground. Only the edge beams of the waffle slab rested properly so the building was sinking fast.

Secondly, we discovered unusually large voids under the waffle slab. We observed the ground hadn’t been compacted and compressed properly. As a result, the soils were weak and couldn’t resist downward pressure. Footings were much shallower than usual and there was also an absence of binder in the soil.

This implied the original contractors had been in a hurry and had tried to cut costs and take shortcuts. The waffle slab design was flawed and building of the house had started without the necessary preparation.

Images of a typical waffle slab construction process with deep and compacted foundations.

As the ground was so unstable, the first thing our engineers had to do was increase the bearing capacity of the ground. We needed to fill the huge voids under the waffle slab as well as stabilise the ground under its load bearing beams.

To do this, we strategically drilled tiny 1cm access holes in multiple locations along the junction points of the waffle slab’s beams. This gave us access to all the right spots.

Using lances, we injected our proprietary geopolymer resin solution, GeoPoly™, through the access holes deep into the ground. This filled the voids,

raised the structure 15mm, and helped increase the load bearing pressure of the soil.

A residential building that’s only 15-years old is relatively new.

It should never have shown such structural problems. The original contractors had tried to save themselves trouble but their actions only transferred trouble to the homeowner, real estate agent and tenants.

With our extensive experience and expertise, we were able to turn a difficult and potentially dangerous situation around in just a day. Horizontal wall cracks and cornice gaps have now been closed up. And the floors around the house are perfectly level. 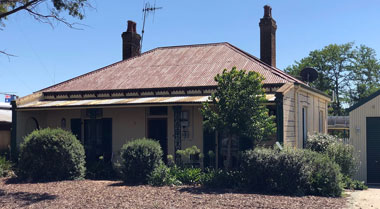